Guilin is accompanied by an abundance of sunshine throughout the year, unlike many other major cities of China. Guilin weather remains relatively hot and humid during the monsoon season, which spans across spring (March to May), summer (June to August) and autumn (September to November). Winter brings a dryer climate, less-intense temperatures, and day after day of sunshine.
Guilin, China’s most pictorial region, experiences a monsoon-influenced humid subtropical climate.

.
Rainy season
From March to August Guilin goes through a long monsoon season. Although the average temperature is high in this season, it remains pleasant at the outset of March wit 17°C of temperature. However as the season progresses it climbs higher, as in August the highest temperature may stand at 33°C while the low at 25°C. June is the wettest month of the year with a great level of precipitation; more than 350mm. On the other hand the city receives not more than 2 hours of sunshine during May. But as the season advances the level of sunshine rises and consequently Guilin witnesses around seven hours sunshine.

Summer
Summer comes in October in Guilin and lasts till mid December. Throughout the season the average high stands at 20°C while the low hardly falls below mid-teens. The period features a reduced level precipitation with slight variation that fluctuates between 60-65 mm.

Dry season
Fall and winter can be classified as dry season in Guilin. During this season, the city receives more cold temperature. The average high in January stands at 11.5°C while the minimums fall below 5°C. February receives only 50 hours of sunshine that is the lowest in the whole year. Although the city receives a decreased level of rainfall throughout the dry season, it is not infrequent. 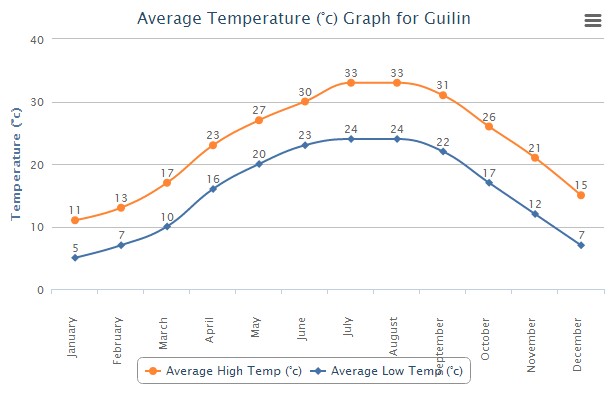 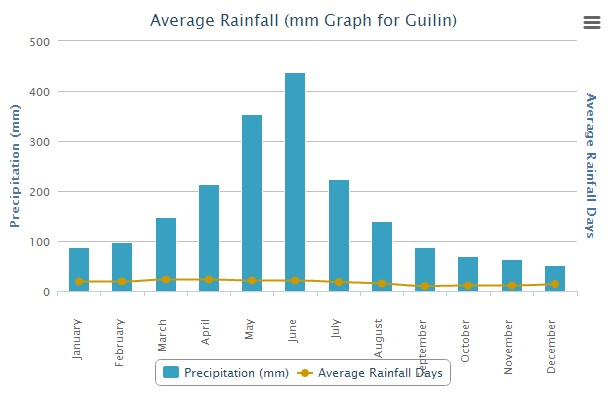