Famous for its wonderful scenery, rivers and karst peaks covered in lush greenery, Guilin has a long history as the most beautiful place in China. Established in the Qin Dynasty as a regional power base for the first emperor of China, Guilin’s population exploded to around a million during the 1930s when the city was a Communist stronghold against the Japanese. In recent decades, although development and exploding tourism are changing the face of this beautiful city, Guilin has remained one of China’s greenest and scenic cities.

Guilin is situated along the Lijiang River, which is a favorite travel attraction in itself. The beauty of the water and the karst peaks towering into the sky have attracted travelers to this area for centuries. 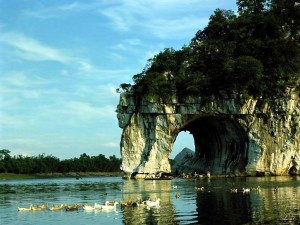 About Guilin and Guilin Tour introductionParallel to the Lijiang River runs Zhongshan Road, Guilin’s main street. In the middle of the city on both sides of Zhongshan Road are Banyan Lake and Fir Lake respectively, each a beautiful park in its own right. To the north stands Solitary Beauty Peak, Guilin’s most prominent karst peak. Along the Lijiang River are two more peaks, Fubo Hill and Elephant Trunk Hill, each proudly showing off Guilin’s unique scenery. Elsewhere in the city is the immense Seven Star Park with seven peaks and six caves as well as pavilions and gardens to enjoy. Lastly, on the northwestern outskirts of town is Reed Flute Cave, one of the area’s wonderful underground sights. 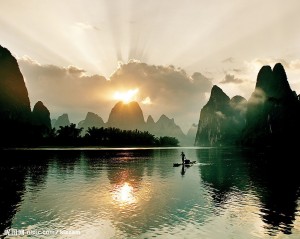 While Guilin is a very beautiful place, many travelers simply pass though Guilin on the way to their true destination, Yangshuo. Yangshuo is 83 kilometers along the Li River, settled amongst the most beautiful part of the Li River’s karst scenery. Less than 2 hours by bus, Yangshuo has become something of a backpacker’s legend and the relaxed pace of life, good food (including some great western cuisine), friendly people, scenic beauty, flat landscape of rice fields and streams perfect for cycling make it paradise for all those who wish to get a rest from the harsher aspects of life in China. Yangshuo’s best sights include Moon Hill with its local villages and caves, Green Lotus Peak, and Yangdi Village.