The Qin Terracotta Warriors and Horses are world famous, attracting a large number of tourists from home and abroad to visit each year. However, they are only a part of the yet unexcavated mausoleum of Emperor Qin Shi Huang located to its west. Inside this huge mausoleum, greater things are yet to come.

Qin Shi Huangdi (259 BC – 210 BC), the first emperor of China, ascended the throne at the age of 13, when construction of his tomb began. On completion of his many conquests, he ordered 720,000 conscript laborers to hurry up on building his royal tomb. It was finished just-in-time in 210 BC for his use. His son, the second Qin Emperor, saw his entombment.

The tomb of Qin Shi Huang is located in the eastern suburbs of Lintong County, 35 kilometers (22 miles) east of Xian: on the Lishan Mountain in the south and overlooking the Wei River towards north. The lay of the land from Lishan to Mount Hua is shaped dragon-like according to traditional Chinese geomancy. The imperial tomb is at the eye of the dragon. The emperor had chosen well.

In size, the mausoleum is larger than the Great pyramid in Egypt. Seen from afar, it is a hill overgrown with vegetation. It is believed that the tomb consists of an interior city and an exterior city. The exterior of the mausoleum is a low earth pyramid with a wide base. In 2000 years, the original 100-meter-high (328 feet) hillock has been weathered down to about 47 meters (154 feet) high, 515 meters (1,690 feet) long from south to north and 485 meters (1,591 feet) wide east to west. In an area of 2,180,000 square meters (less than one square miles), many large-scale alhambresque buildings housing precious treasures are said to be buried inside the tomb.

The labourers came from three groups of people. The first were the craftsmen. The second were the prisoners. The third were the people working to repay a debt. These people had violated the rules at that time and had to pay a fine. But with no money to pay fines, they were forced to build the mausoleum. According to historical records, the mausoleum was a notorious crime scene. Many laborers died of hardship during its construction, and all the workmen were entombed along with the emperor in order to keep their mouths shut. 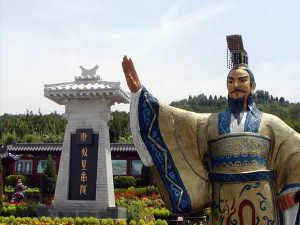 Sima Qian, a great historian who wrote in early Han dynasty, offered archeologists great insight on the mausoleum’s construction. We learned from him that the tomb is huge. The coffin of Emperor Qin Shi Huang was cast in bronze. Underground Palace was gem-studded replica of imperial housing above ground. Moreover, booby traps with automatic-shooting arrows were installed to deter would-be tomb robbers. Heaven and earth were represented in the central chamber of the tomb. Ceiling shaped into sun, moon and stars by inlaying pearls and gems symbolizes the sky and the ground was an accumulation point of rivers, lakes and seas, like Yellow River and Yangtze River, which stands for the earth. It is said that the underground palace was brightly lit by whale oil lamps for eternity. Nowadays, the records in this book have been definitely proved right by archaeological findings and the underground palace of the tomb is presumably well preserved.

Remains of the Mausoleum

As a part of the mausoleum, the terracotta warriors have dazzled the world. But the materials unexcavated are also worth studying. Qin bricks and tiles, engraved with decorative patterns, are strew everywhere around the tomb. There are many satellite tombs built for accompanying Qin Shi Huang. Ministers, princesses and princes, the famous and the not so famous were inhumed there. The burial pits for horses, rare birds and pottery figures were ever regarded as the sacrificial objects to the emperor. Hence the remains from these tombs and pits are beneficial for archaeologists to make further research.

Hopefully one day, the entire mausoleum will be unearthed and displayed to the public.