Xian, the eternal city, records the great changes of the Chinese nation just like a living history book. Called Chang’an in ancient times, Xian is one of the birthplaces of the ancient civilization in the Yellow River Basin area of the country. During Xian’s 3,100 year development, 13 dynasties such as Western Zhou (11th century BC – 771 BC), Qin (221 BC – 206 BC), Western Han (206 BC – 24 AD) and Tang (618 – 907) placed their capitals here. So far, Xian enjoys equal fame with Athens, Cairo, and Rome as one of the four major ancient civilization capitals.

Xian is the capital of Shaanxi province, located in the southern part of the Guanzhong Plain. With the Qinling Mountains to the south and the Weihe River to the north, it is in a favorable geographical location surrounded by water and hills. It has a semi-moist monsoon climate and there is a clear distinction between the four seasons. Except the colder winter, any season is relatively suitable for traveling. 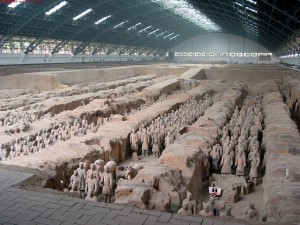 The cultural and historical significance of the area, as well as the abundant relics and sites, help Xian enjoy the laudatory title of ‘Natural History Museum’. The Museum of Terra Cotta Warriors and Horses is praised as ‘the eighth major miracle of the world’, Mausoleum of Emperor Qin Shi Huang is listed on the World Heritage List, and the City Wall of the Ming Dynasty (1368 – 1644) is the largest and most intact Ming Dynasty castle in the world. In the city, there is the 3,000 year old Banpo Village Remains from the Neolithic Age (approximately from 8000 BC to 5000 BC), and the Forest of Stone Steles that holds 3,000 stone steles of different periods from the Han Dynasty to the Qing Dynasty. Around Xian, the Famen Temple enjoys the reputation of being the ‘forefather of pagodas and temples in Central Shaanxi,’ because it holds the finger bones of Sakyamuni — the founder of Buddhism. The natural landscape around Xian is also marvelous Mt.Huashan one of the five best-known mountains in China, is famous for its breath-taking cliffs and its unique characteristics. 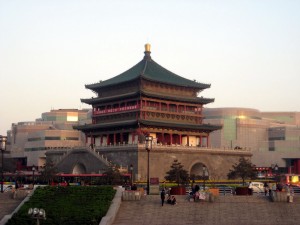 Traditional downtown Xian refers to the area encircled by the city wall, this has now been expanded to encompass the area within the second ring road (Er’ huan Lu). The Bell Tower is the geographical center of Xian and the four main streets are respectively Dong Dajie, Xi Dajie, Nan Dajie and Bei Dajie which are also the main commercial streets. Xiao Zhai, the busiest commercial area is in the southern part of the city and is popular with both youths and students since many universities are located here. Shuyuan Men and the still under construction Luoma Shi are must-visit pedestrian streets in the city. Xian is also famous for its quantity of colleges throughout China. The old campuses of many colleges and universities are massed in the southern suburb of Xian, but most have established new campuses in far southern suburb – Chang’an District due to the lack of space within the city.

As tourist development grows in Xian, the hotel industry flourishes more and more. It is very easy to find a hotel in Xian, ranging from 5 star hotels to youth hostels. Of course, it will be any traveler’s first choice to stay in the city center due to the superior geographical location and the convenient transportation.

Praised as ‘the capital of table delicacies’, Xian has been rich in the delicious Shaanxi snack, delicate Guangdong Cuisine, various kinds of fashionable foreign delicacies, and popular Sichuan Cuisine such as the hot pot. Among all the delicacies, the most famous and popular one is the Muslim Snack Street.

Xian is the most important city in northwest China, and so there are a lot of shopping outlets for locals and tourists alike. There are many big shopping centers, department stores and supermarkets in and around Xian city – the biggest and most comprehensive being Kai Yuan Shopping Mall and Century Ginwa Shopping Mall.

The night life in Xian has a unique glamour. Traditional ways include enjoying the night scenery around the Bell Tower, taking part in a Tang Dynasty Dinner Show, strolling on the ancient Big Wild Goose Pagoda Square and watching the music fountain performance. More modern and fashionable ways include singing in the KTV, hanging out in a bar, or dancing in a Disco. All in all, any experience in this ancient city will bring you fun and possibly a little surprise!