The weather in Yunnan Province, not surprisingly, is as varied as the terrain itself. To give an idea of the range of the climatic variation in Yunnan Province, the Jade Dragon Snow Mountain is in an Alpine mountain range near Lijiang, in the northwestern corner of the province, about 350 km (215 mi) northeast, as the crow flies, of the provincial capital, Kunming, while about 600 km (370 mi) south-southeast of Lijiang, as the crow flies, near Yunnan’s – and China’s – border with Myanmar and Laos, lies the tropical rainforest, Xishuangbanna, home to China’s last remaining herds of wild Asian elephants, the environmentally-threatened (and now protected) Yunnan Golden Monkey, and many endangered species of plants as well as animals.

In most of the province’s different climatic regions, the weather varies more on a daily basis (night versus day) than on an annual, or season-to-season, basis within the given region. There are three lateral-spatial (as opposed to vertical-spatial) climatic zones in Yunnan Province: a temperate zone, a sub-tropical zone and a tropical zone. Generally speaking (with the exception of two river basins: the Jinsha and the Yuan), the temperature and rainfall levels increase the farther south one proceeds in the province. The Jinsha River Basin, which comprises Tiger Leaping Gorge, the world’s deepest gorge (it passes between Jade Dragon Snow Mountain and Haba Snow Mountain in the northwestern part of the province), exhibits a mostly dry, hot, subtropical climate at its base, while the Yuan River Basin, located in the southern part of the province near the Laotian and Myanmar borders, is of the more humid subtropical climate type.

The strictly subtropical and tropical zones (i.e., not belonging to river valleys) otherwise generally belong to a humid, monsoon climate type, characterized by heavy daily rain periods, albeit, unevenly distributed, during the wet season – with more rain and greater humidity in the tropical than in the subtropical zone – and with a flip-side season that is dry. The wet season, which predominates in the subtropical and tropical zones and accounts for about 85% of the annual precipitation in these zones, stretches from May to October. The precipitation pattern in the temperate zone is more normally distributed, albeit, with slight concentrations during early spring and late fall. Vertical-spatial climatic zones appear on the slopes of mountains, where a subtropical zone may exist at the base of the mountain, above which are “stacked” a temperate and a frigid zone, respectively, the latter often with year round snow near the summit of the mountain. In general, the temperature decreases by 0.5 °C for every 100-meter increase in elevation.

If you had to pick a single province in all China that would expose you to the greatest variations in topography and climate, it would have to be Yunnan Province. There is an old and accurate saying here that “You can enjoy all four seasons on the same mountain, where each of these four season is only a few miles distant from the others.

Best Time to Visit Yunnan
The best time to visit Yunnan Province, if you wish to visit the tropical and subtropical localities especially (Yunnan Province has the greatest depth and breadth of plant life – if not animal life as well – in all of China in these localities, especially in the Xishuangbanna area), is from April to June, when spring is literally unfolding before your eyes, sunshine is plentiful, rain infrequent and the humidity is not yet a factor to be reckoned with. But of course, the more temperate parts of the province can be enjoyed year round, and if you are the hardy type, then the best time to visit Yunnan Province is when you’re free, i.e., during your annual vacation period! 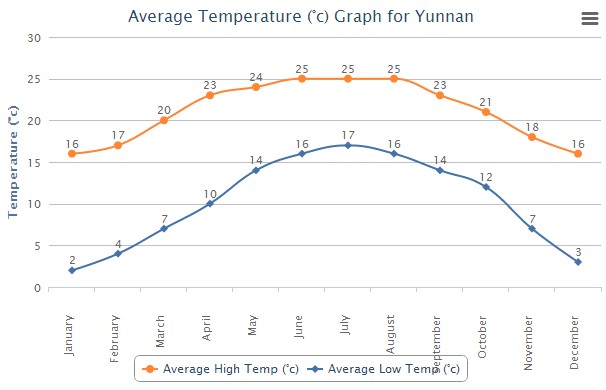 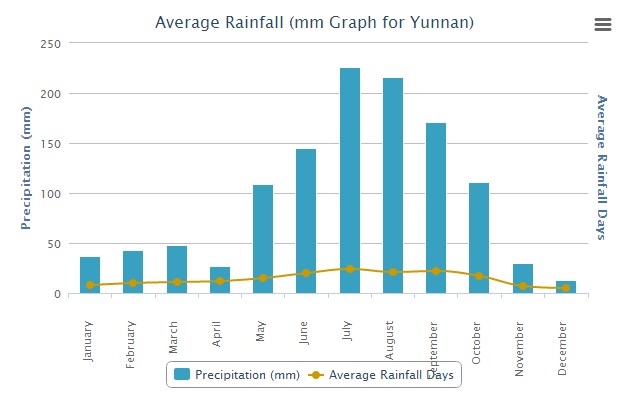