Weather in Xi’an depends on which of the four seasons that travellers visit in. Summer is long (May to August) and known to be hot and humid. The summer monsoon brings both the hottest and wettest month in July; average highs reach 32°C. Xi’an weather in winter (December to February) is mainly cold and dry. Autumn and spring are therefore quite brief.

.
Xi’an, the capital of the Shaanxi province, and a sub-provincial city in the People’s Republic of China, experiences a continental monsoon climate with four distinct seasons.

Summer
During summer, from June till August, Xian becomes hot and humid. July is the hottest month of the year when temperature climbs to 35 C. Although the season receives plenty of rainy days, excessive heat becomes somewhat difficult to bear the climate. On the other hand, the average high in Xian hardly falls below 25 C throughout these summer months.

Autumn
During autumn, from September till November, Xian receives a temperate level of sunshine and precipitation. It is considered as one of the best seasons to visit the city. The average high stands at 19 C at the outset of the period. However, it falls dramatically in November and stands at mid-teens.

Winter
Xian receives the coldest season of the year in December through February. During the season the average high temperature stands at 6 C which appears very much chilly. January is the coldest month of the year when temperature falls below -3 C. The season remains dry and snowy for the visitors.

Spring
The temperature increases quickly during spring, from March till May. March sees more than 8 C of average high that stands around 20 C during May. Although the season witnesses a little rainfall, it is the best time to visit Xian since the pleasant temperature, gentle breezes and warm sunshine everything becomes ready to welcome you. 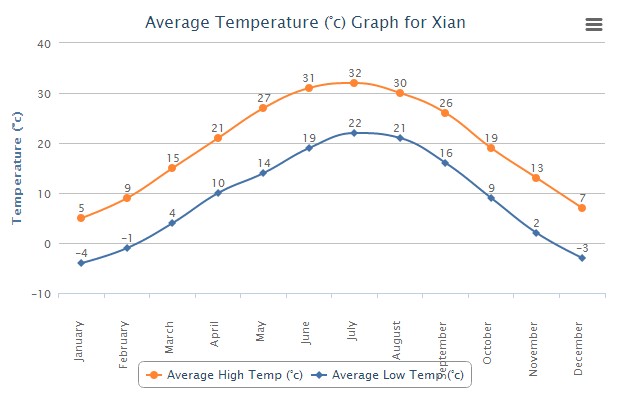 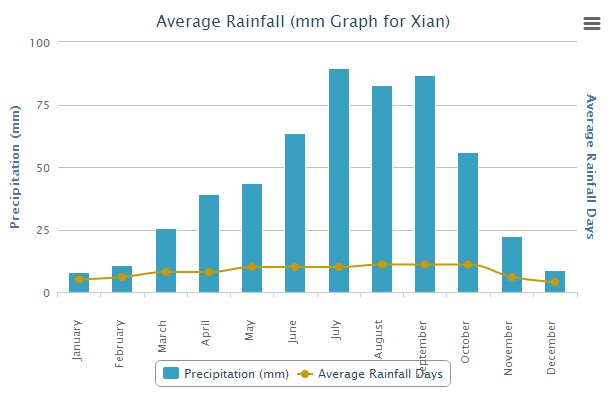