Located in the sub-tropical zone, Sichuan enjoys a unique climate due to the region’s uncommon and varied topography and the influence of alternating weather patterns. Sichuan’s eastern basin is characterized by a damp climate, while the Western Sichuan plateau and mountain areas have various dryer climates depending on altitude with some areas reaching heights of over 5000 meters.

Rainfall
In winter, Sichuan’s climate is dry with little rainfall. Sichuan gets abundant rainfall from April to October, but in the west of the province, the rainy season is from May to September. Generally the eastern areas receive more rainfall than the western, and the basin areas gets more rain than the plateau regions. 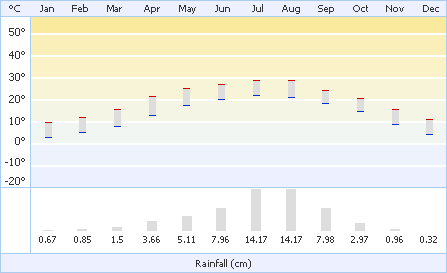