.
Sichuan is located in the upper reach of the Yangtze River and the hinterland of Southwest China. It is bordered by Hubei and Hunan in the east, Guizhou and Yunnan in the south, Tibet in the west and Qinghai, Gansu and Shanxi in the north. Thanks to the favorable climatic conditions, intensive farming and numerous mineral resources, Sichuan wins the honor of “Land of Abundance”. The capital of Sichuan province is Chengdu, situated in the middle of the Province.

With an area of 485,000 square kilometers and a population of over 87 million, Sichuan is the hometown of Deng Xiaoping, the general architect of China’s reform and opening up to the outside.

The economic strength of Sichuan has ranked ninth in the country and first in West China. The GDP and other main economic indexes of Sichuan account for one quarter of the total of the 12 provinces, municipalities, and autonomous regions in Western Region of China.

Sichuan is the biggest commodities distribution center in Western Region of China. Chengdu, is the center of commerce, trade, finance, science and technology as well as the hub of transportation and communications. Recently, Chengdu has been designated by State Council as National Urban-Rural Integration Supporting Reforms Comprehensive Trial Area. 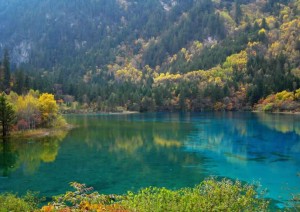 Sichuan is endowed with hydropower and mineral resources. Reserves of 11 kinds of rare metals including vanadium and titanium enjoy a leading position in China even in the world. Sichuan also boasts as many as 4,500-odd herbal medicines and affluent animal and plant resources.

With the implementation of the Great Strategy of Developing Western Region of China launched by China central government and the acceleration of economic globalization, Sichuan enjoys a rapid economic growth and overall social progress. The average annual GDP growth rate in the past 5 years hits 10.7%. Sichuan’s GDP in 2006 amounts to 112.7 billion US dollars.

With the continuous expanding of the opening up, Sichuan has conducted economic and trade exchanges with over 190 countries and regions in the world. 125 of world top 500 companies have set up offices or started business in Sichuan. The infrastructure in Sichuan is being gradually improved and the investment environment is being steadily perfected. Till now, the United States, Germany, South Korea, Thailand, France, Singapore, and Pakistan, totally 7 countries have established consulates in Chengdu. Therefore, Chengdu ranks No. 3 in Mainland China in terms of foreign consular institution numbers.
Along with the gradual development of internationalization, a multi-directional opening pattern is gradually taking shape in Sichuan.