Chinese people say that unless you visit the Great Wall then you haven’t been to China. For any visit south of the Yangtze River; one place not to be missed is the town of Wuzhen.
Located in the centre of the six ancient towns south of Yangtze River, 17 kilometres (10.56 miles) north of the city of Tongxiang, the Water Town displays its two-thousand-year history in its ancient stone bridges floating on mild water, its stone pathways between the mottled walls and its delicate wood carvings. Also, setting it apart from other towns, it gives a unique experience through its profound cultural background. 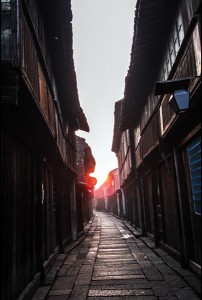 It is said that people have lived here for 7000 years and over time it has produced a galaxy of talents. Mao Dun, an outstanding modern Chinese writer, was born here and his masterpiece, ‘The Lin’s Shop’, describes vividly the life here. In 1991, Wuzhen was authorized as the Provincial Ancient Town of History and Culture, so ranking first among the six ancient towns south of the Yangtze River.

Former Residence of Mao Dun
Originally built in the central 19th century covering a total area of 650 square meters (7020 sq. ft), the former residence of Mao Dun, a well-known Chinese revolutionary writer, was the Mao family home for many generations and witnessed the growth of this great revolutionist and writer. In 1984, the former residence of Mao Dun was renovated and extended to cover a total area of 1,731.5 square meters (18,700 sq. ft) – it opened to the public one year later. In 1988, it was listed as one of the Key State Preserved Relic Units and in 1994 was renamed the Mao Dun Museum of the City of Tongxiang. The house has three exhibition areas: ‘Wuzhen, the Hometown of Mao Dun’, ‘the Way of Mao Dun’, and ‘the Former Residence of Mao Dun (renovated)’. The present Mao Dun Museum can be found to the east of the residence, which used to be Lizhi Shuyuan (Aspiration Academy) where Mao Dun spent his early school years.

Fanglu Pavilion (Pavilion of Visits to Lu)
Enjoying a well-deserved reputation as the best teahouse in the town, the pavilion obtained its name from an accidental meeting between Lu Tong, the owner, and Lu Yu, the Patron Saint of Tea in Tang Dynasty (618-907). It is said that Lu Yu once mistakenly ate some poisonous leaves and was rescued by Lu Tong, who happened to collect tea leaves at that time. In return, Lu Yun taught Lu Tong knowledge of tea and tea-making skills, which resulted in the prosperity of Lu Tong’s teahouse. Suggested by one guest, Lu Tong changed the house’s name to Pavilion of Visits to Lu, to memorize this respectable scholar. Located to the south of Ying Bridge and backing onto the city river, the teahouse enjoys a broad view of Guanqian Street and provides visitors with pleasant relaxation.

Bridge in Bridge
One may be amazed at the extraordinary scene of Bridge in Bridge created by two ancient bridges, one of which is Tongji Bridge crossing the river from east to west and the other is called Renji Bridge running from south to north and joining the former at one end. Either of two bridges can be seen through the arch of the other, hence the name. Having been rebuilt five times, Tongji Bridge is a 28.4-meter-long (93.1ft) and 3.5-meters-wide (11.4ft) one-curvature arch bridge, with a span of 11.8 meters (38.7ft). Renji Bridge, which has also experienced historical repairs, has a length of 22.6 meters (74.1ft), a width of 2.8 meters (9.2ft) and a span of 8.5 meters (27.9ft).

You may enjoy the demonstration in the traditional workshops district of such famous traditional crafts as the printing and dyeing of blue printed fabrics, the primitive technique of cloth shoes and tobacco-planing, and operate the machines yourself to get an idea of how the original work was carried out over 200 years ago. You may also walk amongst the picturesque moss-covered streets and walls, the houses decorated with exquisitely-carved wooden and stone doors and windows, and the leisurely and quiet life of the local people in the district of traditional local-styled dwelling houses. Sink into the atmosphere of traditional culture, have a cup of chrysanthemum tea and relax by bargaining on various kinds of handicrafts and local products. At dusk when the street lamps give off their dim lights in the thousand-year-old lanes, you will feel your every step echoing with the history of this ancient and attractive town.