The Xinjiang Uygur Autonomous Region, also called “Xin” for short, is located in northwestern China. Largest in area in all the province-level administrative regions of China, it covers an area of 1.66 million square kilometers, one sixth of Chinese territory. Situated in the hinterland of Eurasian continent, Xinjiang of China borders eight countries such as Russia, Kazakhstan, Kirghiziastan, Tajikistan, Pakistan, Mongolia, India and Afghanistan. The geographic position of Xinjiang makes it very important in strategy. In history, Xinjiang served as the key controlling section of the well-known Silk Road, while now it is an unavoidable part of the railway leading to the second Eurasia Continental Bridge. 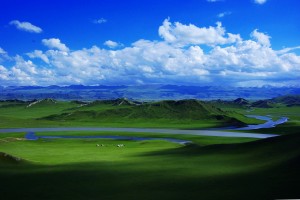 Xinjiang, called Western Region in ancient times, has been an inalienable part of China from ancient times. In 60 B.C., Xinjiang officially became a part of China’s territory for that year central government of the Western Han Dynasty founded the West Region Frontier Command here. In 1884, the government of the Qing Dynasty established Xinjiang Province. In 1949, Xinjiang was liberated through peaceful means. October 1, 1955 saw the establishment of the Xinjiang Uygur Autonomous Region.

Presently, there are 14 prefectures (including prefectures, autonomous prefectures and prefecture-level cities) and 88 counties (including cities and cities at county level) under the government of the Xinjiang Uygur Autonomous Region, including 33 counties (county-level cities) in border areas. The Xinjiang Production and Construction Corps (XPCC) is an important component part of Xinjiang and has 174 regimental agricultural and stockbreeding farms under it. By the end of 2004, the population of Xinjiang had reached 19.6311 million.

Characteristics of landform of Xinjiang are described as mountains and basins alternating with each other and basins caught in mountains’ embrace. Local people simply describe this characteristic as “three mountains with a basin between each two”. In the north lies Mountain Altai, in the south is Mountain Kunlun, while Mountain Tianshan lay along the middle dividing Xinjiang into two parts: in the southern part stretches Tarim Basin and in the northern part Jungar Basin. By custom, the part south of Mountain Tianshan is called South Xinjiang, the part north of Mountain Tianshan called North Xinjiang. Tarim Basin, the largest of its kind in China, lies between Mountain Tianshan and Mountain Kunlun. In the center part of Tarim Basin stretches Taklimakan Desert, the largest mobile desert in China and the second largest in the world. 2100-km-long Tarim River is the longest continental river in China. In the east of Xinjiang is Turpan Basin where the lowest point is 154m high, being the lowest part of China in height above sea level. In climate, Xinjiang is under the control of a typical extratropical belt continental climate. According to statistics conducted at the end of 2001, the annual precipitation amount of Xinjiang only stands at around 100 mm. In mountains of Xinjiang, there are many rivers resulting from snow broth on mountains. Oases lie on the edges of basins and in river valleys. With oasis taking up 5% its total area, the eco-system of Xinjiang is characteristic of oasis eco-system. 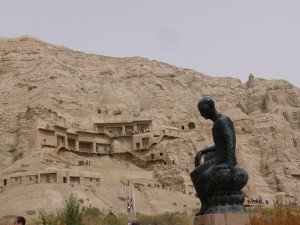 Xinjiang is abundant and unique in its tourist resources. Xinjiang boasts at least 56 of the 68 kinds of tourist resources in China listed in China National Norms for General Survey on Tourist Resources, ranking first in China. Further, landscapes here are both unique and beautiful. If you go there, you will be attracted by wild landscapes and particular combination of natural sights. Here, you can see snow-capped mountains stand in very hot land, and deserts neighbor on oases. Some famous scenic spots maybe have already been known to you, such as Tianchi Lake, Kanas Lake, Bosten Lake and Bayanbulak Grassland. Xinjiang is also rich in cultural tourist resources. The world famous ancient Silk Road had three trunk lines across Xinjiang totaling over 5,000km. Along the three trunk lines of Silk Road there are hundreds of cultural sights such as ancient cities, ancient tombs, thousand-Buddha caves and ruins of ancient garrison troops-cultivated land. Of them, well known both at home and abroad are Jiaohe Ancient City, Gaochang Ancient City, Loulan Ancient City, Kizil Thousand-Buddha Grotto and Apak Hoja Tomb (commonly known as Xiangfei Tomb). Xinjiang is a multi-ethnic region where cultures, art and custom of various ethnic groups constitute cultural sights with rich ethnic features that are popular with tourists from both home and abroad.