Guangdong is located in the southern part of the south China Sea, encompassing a total 179,766 square kilometers. From north to south, the altitudes of landforms decrease. The highest mountain is the Shikengkong peak with a height of 1902 m above the sea level. The mountain and hill areas cover most of Guangdong without many plains. 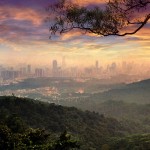 The Tropic of Cancer runs through Guangdong, the southwest part of which and the Leizhou Peninsula are in the tropical zone, and other parts in the subtropical zone. It is warm and rainy all the year round, the average temperature ranges from 19 to 26 centigrade degree, the average annual rainfall is more than 1500 mm, and the rainy season is from April to September.

About 130,000 years ago, the Home sapiens, the Beijing River “Mabaren”, evolved into the Xijiang River “Fengkairen” about 12,000 years ago, and then to Baiyueren about 4,000 years ago. In 214 B.C. the first emperor in Qing Dynasty brought the Lingnan under his control, and divided it into three parts: the Han People moved into these regions and the County. Since that time, the Han People moved into these regions and the Baiyue People became the members of Chinese nation. By now there are also many ethnic minorities such as the Miao, the Yao, the Hui, the Man and the She in the GuangdongProvince. In 1989 the population was estimated at 60,240,000. Besides, there are a large number of Guangdong people who have emigrated abroad. GuangdongProvince was first set up in 1370 A.D. with Guangzhou as its capital. People in GuangdongProvince have revolutionary traditions. The first page of Chinese modern history began in Guangdong (the Anti-imperialism’s Opium War), which is also the starting point of the Chinese Democratic Revolution. 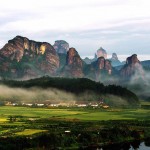 As the South Gate of China, Guangdong has been opining to the outside world for a long time. Since the adoption of opening and reforming policy in 1978, three special economic zones, Shen Zhen, Zhuhai and Shantou, have been established, and Guangzhou, Zhanjiang, the Zhujiang (Pearl River) Delta areas and the whole coastal regions have been opened. Its industry is developing and agricultural products (rice, fruits, fishing, etc) are abundant. Its economy is developing rapidly.

The transport in Guangdong is very convenient. With more than 100 ports, the water transportation has been playing a very important role. The ocean shops go from Guangzhou or Zhanjiang to South East Asia, Africa, Europe and America, and more than 40 ports in Shanghai, Dalian, Tianjin, Qingdao, Nantong, Ningbo, Yantai, Fuzhou, Xiamen, Wenzhou, Beihai and etc. Guangdong is also one of the provinces in China where the highways have been developed into the networks all over the province. And there are four railways: Beijiang to Guangzhou, Guangzhou to Jiulong, Guangzhou to Maoming and Litang to Zhanjiang. The air transport services are developing rapidly. Besides an airport in Guangzhou, there are some other airports in Zhanjing, Shantou, Zhuhai, Shenzhen, Foshan, Huizhou, Wuhua, Meixian, Yangjiang etc., which connect with all the large cities in China. There are more than 10 international airlines. 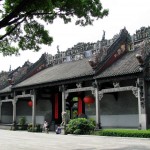 Ancestral Temple of the Chen Family

The handicraft industry in Guangdong is in the lead in the whole country with a long history and unique features. As early as 1870s, the handicraft industry in Ganging had become well known as “guanghuo”. Hardware (such as keys, knives, flashlights), umbrella, leather products, furniture (especial the carved mahogany furniture) are all well-known in the world. Among the artware, the ivory carving, gem carving, iron carving, porcelain carving and golden-wood carving are well known for their excellent design. The Guangdong embroidery and the Chaozhou embroidery, one of the four kinds of best embroideries in China, are known for their beautiful patterns and exquisite craft. Besides, there are also Zhaoqing’s inkstone, Dongguan’s fireworks, Shiwan’s porcelain and Xingning’s folding fan.

The local culture in Guangdong is also well developed. The main dialects are Guangzhou dialects, Hakka dialects and Chao zhou dialects. There are Guangdong local music, Yue opera, Chaozhou opera and Guangdong Han opera. The Lingnan architecture, Guangdong cooking and folk custom are all fascinating. Guangdong is a place with beautiful mountains and rivers, moderate climate and many scenic spots. The LuofuMountain, the Danxia mountain, the DinghuMountain and the XiqiaoMountain are the four famous mountains in GuangdongProvince. There are also many wonderful attractions for tourism and holidays all over the province.