Wenshu Monastery (Manjushri Monastery), located at No. 15 Wenshu Yuan Street, Chengu, Sichuan Province, is the best-preserved Buddhist temple in Chengdu. It is the home of the Buddhist Association of Sichuan Province and Chengdu City. 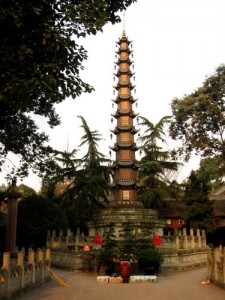 Initially built in the Tang Dynasty (618-907), Wenshu Monastery was once called Xinxiang Temple. In 1681, during the reign of Emperor Kangxi of the Qing Dynasty (1644-1911), Cidu, an accomplished Buddhist monk, came to the temple. He built a simple hut between two trees and for several years lived an ascetic life there. Legend has it when Cidu was being cremated; the statue of Wensu (Bodhisattva Manjusri in Sanskrit) appeared in the flames, staying for a long time. So people regarded Cidu as the reincarnation of the Bodhisattva Manjusri. Thereafter, Xinxiang Temple became Wenshu Monastery.

Cultural relics are the highlights of Wenshu Monastery. Since the Tang and Song dynasties, over 500 pieces of painting and calligraphy by celebrities have been stored here. In the Sutra-Preservation Pavilion, many famous handwriting exhibits, paintings, and artwork are restored. These precious works of art were created by renowned Chinese painters and calligraphers, including Zhang Daqian, Zheng Banqiao, and Feng Zikai. Of all the precious relics, a piece of the broken skull of Xuan Zhang, a renowned monk of the Tang Dynasty, is the rarest. Another treasure is a delicate jade Buddha statue brought from Burma to China in 1922 by Xing Lin, a Buddhist monk who walked the whole distance. In addition, the monastery houses some 300 Buddha statues of various materials including iron, bronze, stone, wood, and jade, some gloriously painted.

In addition to its cultural relics, Wenshu Monastery is famous for its exquisite garden and solemn halls. Tourists and locals can enjoy tea in the Tea House while listening to music by folk artists.